As much as possible throughout the development of the South Wales GeoTours website AND in the construction of presentation material I have striven to acquire and use as much of my own graphical material. In so doing I naturally avoid any copyright issues. If any images provided by others are used I acknowledge those as such. The images presented in the South Wales GeoTours website were taken from the range of equipment described in this blog article.

I have always had an interest in photography. I purchased my first SLR camera (a Zenith) and lenses whilst I was at Aberystwyth University; I subsequently upgraded to an Olympus SLR (EM-1) a few years later when I was studying for my Masters Degree at Aberdeen. Both of these cameras pre-dated the advent of digital technology.

My first purchase of a digital camera was a pocket Nikon camera made in 2003 (TG-310) living in Kuala Lumpur, Malaysia. It was effectively a point-and-shoot camera and I soon became frustrated with it as it offered no functionality in terms of changing aperture or shutter-speed. But then I knew that when I bought it! Unfortunately, the camera ceased to work within 2 years.

I was without a camera for three years until 2008. Whilst passing through Singapore on the way home to Brunei from a vacation I purchased a Canon EOS Rebel T5 with a kit lens. This was a good digital camera to re-familiarise myself with photographic techniques. I captured some good images on travels around Brunei and Indonesia and probably it would have been sufficient if not for the fact that I befriended a very good photographer at work (at BSP). He is a fantastic photographer (much better than me) and trips out taking photographs with him around the BSP camp pressed upon me the need to “get a better camera” if I wanted to take really good photos. I advertised the Rebel and lenses at work and fortunately someone purchased the equipment from me.

I subsequently upgraded in 2010. I purchased the camera body and lenses whilst on vacation in Jakarta, Indonesia. I was aware of a reputable but cost-effective photography dealer (Jakarta Photography Centre) located in the Kemang district of Jakarta. I had previously done the necessary research into the various options for manufacturers (Nikon, Canon, Olympus, Pentax, Ricoh, Hasselblad) and limited my final choice between Nikon and Canon. This was based on the availability of a wide range of high-quality but affordable (just…) lenses and accessories. In the end I settled for Canon based on my earlier good experiences with Canon.

I purchased a Canon 5D Mark 2 as it is one of the two Full-Frame format Canon DSLR cameras, the other being the Canon 1D, but that camera is professional level equipment which is out of my price range. Full-Frame format means that what you see in the view-finder is what is captured by the sensor, whereas the majority of DSLR cameras use CMOS image capture sensors that effectively crop the image seen in the view-finder due to size limitation.

The lens I purchased to use with the 5D was the Canon EF24-70mm f/2.8L USM as I felt this was the best lens for the type of photography I enjoy, namely Street and Portrait photography. I also purchased some filters to protect the lens from scratching and to provide some UV filtering.

A year later, in 2011, I purchased the EF70-200mm f/2.8L USM telephoto lens to compliment the EF24-70mm lens. The EF70-200mm lens provided me with a degree of telephoto functionality in addition to being a benchmark or workhorse lens of professional portrait photographers and photo-journalists.

Two years later, in 2013, I purchased a good quality tripod in Brunei. The tripod I bought is the 055CX3 manufactured by Manfrotto, together with the 488RCO midi ball tripod head. This tripod is very good, and I love using it. It is light, as its made from Carbon fibre, yet is very stable. The final piece of equipment I purchased at that time was the Canon RS-80NS cable release to allow me to take photos without camera shake.

When I am out in the field taking photos, I carry this equipment around in a Crumpler rucksack that is constructed specifically for carrying photography equipment (now discontinued by Crumpler).

As for making trips to outcrops for the purpose of taking photographs there are a number of aspects to consider: 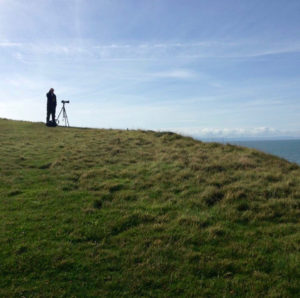 When back home I download the images in RAW format to the Apple iMac and then perform minimal editing of the images using the Canon Digital Photo Professional software. Edits I make generally is limited to cropping and a little sharpening; I try to avoid anything further to that. I finally export the image as smaller JPEG files to allow upload into the website design package I use, WordPress.

A few of the images I use in the website have been taken using an iPhone6, but I aim to use my DSLR camera and EF lenses as far as possible