The Heritage Coast is a rugged 20 km section of the South Wales coastline between Ogmore in the west to Summerhouse point near the village of Aberthaw in the east providing visitors with spectacular views of cliffs and the Bristol Channel together with world-class outcrops of geology. 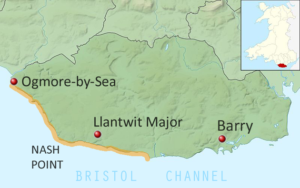 The South Wales Heritage Coast is one of three Heritage Coasts first introduced in 1973/74, the others being the Dorset Coast and the Suffolk Coast. They were established as a partnership between The Countryside Commission for Wales (now natural resources Wales) and the Vale of Glamorgan Council, the latter operating the scheme with two specific aims:

The Countryside Commission in 1970 stated that the aim was “to make the widest use of all coastal resources rather than to preserve scenic stretches for their own sake or to discourage access thereto.” It was hoped that the goodwill generated by a shared responsibility for the coastline would encourage cooperation and effective management strategies which if successful could be deployed elsewhere in the U.K.

There is now a total of 46 Heritage Coasts in the U.K., 14 in Wales totalling 495 km and a further 32 totalling 1,057 km in England. The designation of the term “Heritage Coast” is different to that of a “National Park” or an “Area of Outstanding Beauty.” Whereas a National Park has legal status with paid employees, the Heritage Coast relies 100% on volunteers and voluntary cooperation between parties. The Vale of Glamorgan Council has financial responsibility for the Heritage Coast with additional financial support coming from Natural Resources Wales.

The Glamorgan Heritage Coast occupies the western limb of the Vale of Glamorgan. The rocks on either flank of the Vale of Glamorgan are older than those exposed in the centre of Vale. In other words, if you travel from Porthcawl to Aberthaw, which forms the centre of the Vale, you cross rocks that become progressively younger; if you travel-on from Aberthaw to Penarth you travel into progressively older rocks. This is what geologists term a syncline and is the result of tectonic forces bending the Earth downwards.

The configuration of the geology also explains the origin of the name “the Vale of Glamorgan.” The poetic name Vale equates to a valley or, Val in ancient French (The Vale of Glamorgan was a centre of Norman settlement and culture following the invasion of Britain by William the Conqueror in the year 1066).

What is special about the Heritage Coast is its spectacular cliff sections and wave cut platforms. The cliffs reach up to 50m in height and show beautifully the regularly alternating Jurassic limestones and mudstone that are in places deformed into folds and cut by faults. These cliffs contain abundant fossils ranging from ancient shells to dinosaur bones. 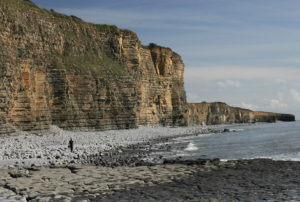 The wave cut platforms that are exposed at low tide display in spectacular fashion this same geology but where it has been eroded flat by the action of the sea to produce what is in effect a map of the geological structure affecting the coastline. The stretch of coastline from Porthcawl to Monknash is designated as a Site of Special Scientific Interest (SSSI) due to the unique geology and botany encountered. 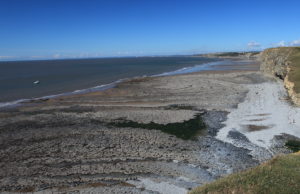