Although the subject of Geology is a fascinating one it does involve spending time in the outdoors in sometimes less than perfect weather and walking across variable terrain to outcrops where the rocks are exposed.

In general, you will walk along pathways when one can chat and enjoy the scenery as you walk; however sometimes you will need to walk down gentle cliff paths or across rocky beaches with slippery seaweed cover to access outcrops.

Hazards and Risk is inherent in any field activity but is managed properly can be reduced to a small enough level as to not destroy what is basically a fun day out in the open air.

Having spent over 30 years in the Oil & Gas industry with frequent visits to the well site, a Safety and Risk Awareness culture has been instilled in me and my hope is that that culture has become embedded in my Geotourism business. If you attend one of my trips and notice any deficiencies in my conduct or attitude, please let me know.

As per the UK Health & Safety Executive*:

Hazard: a hazard is something that can cause adverse effects

Risk:   a risk is the likelihood that a hazard will actually cause its adverse effects

I have made dedicated visits to every location where I may visit on one of my tours for the specific purpose of making a note of all Hazards at that locality, the chance of accidents occurring (i.e. the Risk) and ways that I and participants can mitigate the probability of those incidents. Essentially, I implement the concept of ALARP in that I seek to reduce levels of risk to “As Low As Reasonably Practicable.”

For the various Hazards I identify a Risk level of Low, Medium, or High which I colour code Green, Orange and Red respectively. For each Hazard I make a recommendation as to how to reduce the risk of that specific hazard. A list of Hazards I have identified are as follows:

The latter (*) is not a Hazard per se but I have included it in my Risk Assessment as it does influence the choice of localities to take field parties.

This risk assessment needs to be read within the context that the cliffs that form much of the Heritage Coast are sometimes high and unstable. Where the shoreline is formed of Carboniferous Limestone the relief is minimal. However, where Triassic and Early Jurassic rocks form the shoreline the elevation of the cliff tops can be significantly higher, ranging between 15-30m.

The Triassic rocks are primarily composed mudstone with occasional evaporate (salts) bands (Mercia Mudstone Group), whereas the uppermost layers of the Triassic (Penarth Group) are composed of more homogenous sandy limestones and interbedded mudstones. The mudstones of the Mercia Mudstone Group are crumbly and tend to break into small pieces that can fall from anywhere on the cliff face. The more homogenous limestone units of the overlying Penarth Group can break into blocks circa 1-2m in diameter and circa 10cm in thickness. These heavy blocks can fall without warning. 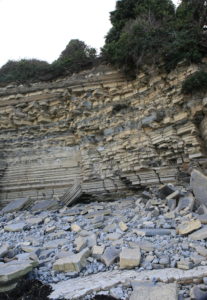 The Early Jurassic Blue Lias Group consist of horizontally bedded black mudstones and grey limestones across large areas of the Heritage Coast. The dark mudstones erode much more easily than the harder limestones. Tide and wave action will result in the mudstone eroding at a far greater rate than the limestones which leads to instability and eventually rock falls. 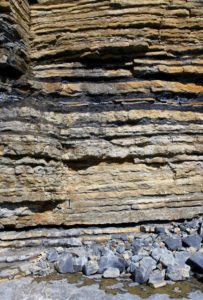 Both the Jurassic and the underlying Triassic rocks have been affected by vertical jointing (a parting of the rock fabric along a plane of weakness). The vertical jointing intersects with the horizontal bedding resulting in enhanced structural weakness. If the weight of the cliff gets to a point where the stresses are greater than strength of the supporting rock the cliff will collapse. It is extremely dangerous to stand both on the edge of a cliff top or, at the base of a cliff, as the cliff can suddenly collapse without warning. 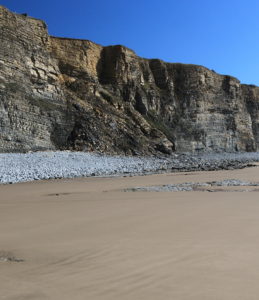 One other very real hazard is the nature of the substrate of the beaches. Some beaches are composed of sand which is easy and safe to walk across. But some locations the beach is formed of abundant cobbles and pebbles thrown-up by wave action and added to by rock falls. Where tides cover these loose rocks, they can be covered in seaweed. Walking on these rocks is hazardous as they can be slippery and wobbly. Walking boots that give you ankle support are essential and maybe a walking pole to improve your balance would be good. 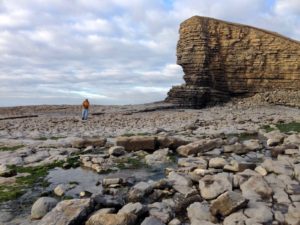 The Bristol channel is an area affected by extreme tidal range, at 15m. In-fact the tidal range of is the second largest in the world, after the Bay of Fundy in Nova Scotia, Canada where the tidal range is only slightly more at 16m. The coastal shelf on the northern side of the Bristol Channel dips shallowly meaning that the tide can rush in at a surprisingly fast rate which can catch people by surprise. This hazard can be mitigated by ensuring visits are only made on a falling tide. 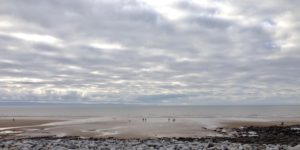 Given these concerns and, in case of emergency, it is important to be within mobile phone coverage at all times. I have walked all localities and noted the signal strength of the phone coverage. All locations had signal.

It is also important that participants treat the coastline with respect by not dropping litter, by not hammering rocks to remove fossils and by not disturbing other beach users.