Tides are caused by the gravitational influence of the Sun, the Moon and the rotation of the Earth. As noted in Blog 4 the Bristol Channel experiences the second largest tidal range in the world at 15m. There are a number of factors that influence that fact: 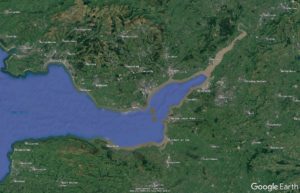 The Bristol Channel has two equal high and low tides every day i.e. Semi-Diurnal (the difference in height between high and low waters over a half-day). The times of High and Low tide advance by circa 1 hour over a 24-hour period and there is generally a circa 6.5-hour time period between High tide and the next Low tide. Average high Tides range between 6-8m in height.

The height of these tides is the direct effect of the gravitational pull on the water of the Moon and to a lesser extent the Sun. Approximately twice a month, at the time of the new moon and full moon when the Sun, Moon and Earth are in alignment tidal range is at its maximum (fig 2). These are called Spring Tides; it does not relate to the season of Spring but rather to the meaning of “jump or burst forth,” as in a natural spring. 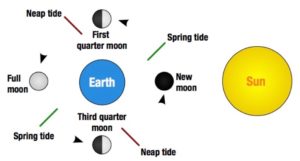 Lunar cycles and influence on tides

When the Moon is at 90°to the Sun – Earth alignment i.e. 1st& 3rdquarter the tidal range is at its lowest. These tides are termed Neap Tides (originating from an Anglo-Saxon word meaning “without the power”).

A further level of complexity to add-on to these two primary cycles concerns the prevailing air pressure systems and then the temporal weather conditions. Consider a situation in winter time during a Spring tide and when westerly storms hit the west of the UK; high water levels are produced by low air pressure, tidal cycles and the weather conditions blowing from the west. The result can be a tidal surge although these are rare.

Field trips cannot operate during high tides because even during Neap tides high tides attain heights of almost 7m when a number of the outcrops to be visited are either inaccessible or, are completely covered by water. It is unsafe to attempt to visit an outcrop on a rising tide, close to high water mark.

Therefore, all field trips will be organised to commence at times when tides are falling during the circa 6.5-hour time period between the high and low tide marks. More outcrop will be exposed when the tidal range is higher, during Spring tides however, the time period between high tide and low tide remains at circa 6.5-hours which then impacts on the rate at which the subsequent tide comes-in., so this too has to be factored in to the schedule.

Thus, the timing of field trips will be dictated by tide times and tide heights in combination with everyone’s normal daily routines and availability. This will result in certain days of the month when field trips cannot operate because high tides occur at midday.

As an alternative I am considering leading trips to inland localities where the geology of the South Wales Coalfield (Late Carboniferous) is exposed. I am thinking of combining discussions on the geology along with the industrial history of the area. I have always had an interest in the history of the Industrial Revolution in the UK, even studying History at A-Level whilst still at school. Thus, trips to places in the South Wales valleys could run when the tides are not good for going to the coastline.

I would really like to hear your opinion on this idea so, if you think you would be interested in such trips please get in contact via the website. I will research localities during the forthcoming winter and can have a schedule of trips organised for the summer of 2019. Please get in touch.