In January 1607, during the reign of the first Stuart King James 1stand a year after the gunpowder plot, a large part of South Wales and Somerset was abruptly inundated by seawater. It is thought that about 2,000 people were drowned and over 200 square miles of land was flooded. Reports state that the beach near Ogmore Castle was engulfed in rocks and boulders in a matter of minutes. Also, recently created sea defences where Aberthaw power station now stands, were destroyed by the force of the flood. So, whatever caused the inundation it introduced water into the Bristol Channel at extreme force, with enough energy to move very substantial boulders (The Severn Tsunami?, Mike Hall, 2013).

Representation of the Great Flood affecting the Gwent Levels, produced some time after the event

Two possible mechanisms could have caused the sudden inundation: A Storm Surge or, a Tsunami. At the time it was attributed to The Almighty as a response to “the sinfulness of Man and his disobedience of Gods law.”

The Royal Meteorological Society (Horsburgh & Horritt, 2006), has back calculated the tidal curve for Avonmouth for the week of 21st-31stJanuary 1607 and it predicts a spring high tide of circa 8m on the 30thJanuary. Such tides are common and not out of the ordinary for the Bristol Channel.

The weather at the time however may provide some important clues as to the cause. The most authoritative account is that made by a gentleman named John Paul, the Vicar of Almondsbury who recorded that a “mighty strong western wind” was blowing on the day. He also recorded that it was a spring tide which adds credibility to his observations. A number of other accounts also state that the weather was stormy on the day of the great flood.

From this circumstantial evidence it is safe to assume that a Low-Pressure atmospheric system had developed in the Western Approaches resulting in high winds and elevated sea-levels (due to the lower weight of air pushing down on the sea) much like are witnessed today during Autumn and Winter (see Blog 5). Modelling also suggests that the Jet Stream may have been flowing in a more southerly track at that time thereby causing in the track of large depressions that normally track over Iceland. Climate reconstructions also indicate that the 16thand 17thcenturies were exceptionally windy.

The wind would have been funnelled-up the Bristol Channel by the physical shape and geography of the area (see Blog 5) and coincided with a moderately high spring tide. The combination of elevated water levels (spring tide and a low air pressure system) with high winds could have been sufficient to push the increased volume of water onto the land. Floods were also recorded on that day in The Wash of East Anglia indicating that the weather was bad all over the U.K. at that time.

An argument against this is would a storm surge have sufficient energy to move boulders the size of double-decker buses and weighing hundreds of tonnes along the shoreline? But a storm surge will have the energy generated by a substantial body of water in the Atlantic supporting it so, maybe it is possible.

Many reports at the time of the Great Flood state that the speed of the wave was so fast that it could not be outrun. These same reports state that the weather was fine at the time which contradict that of the Vicar of Almondsbury. Basically, it would appear that the inhabitants of the area were caught by surprise by the flood.Descriptions in 17th century pamphlets write of “huge and mighty hills of water” appear indicative of a tsunami.

Evidence in the Bristol Channel area that supports the idea that the ingress of water was caused by a tsunami are the placement and alignment of substantial boulders along the beaches of the Bristol Channel and a number of erosional features (Bryant & Haslett, 2007). A thin coarse-grained deposit dated from that time has been encountered in boreholes in the Severn Estuary.

If one looks closely at Southerndown and Nash Point you can see that the very large boulders that litter the upper parts of the beach are aligned west to east and many stack-up on one another in what is termed an Imbricate attitude. There are also scoop-like depressions in the bed-rock near these large boulders.

Similarly, if one takes a discerning look at the shape of the cliffs, at positions tens of meters above current sea-level in the immediate area of Sully (where the Bristol Channel narrows abruptly), it can be argued that the Triassic cliffs are eroded further back than the underlying Carboniferous limestone, forming a substantial notch in the cliff.

The suggestion is that a tsunami flowed up the Bristol Channel on the day of the Great Flood picking-up and redepositing the very large boulders and stacking them upon one another as the water flowed from west to east. It is clear that boulders across the north shore of the Bristol Channel are aligned with their long axis west to east. The extreme abrasive action of such boulders moving across the seabed also produced the scallop-shaped depressions noted in the area and effectively bevelled-off prominent headlands such as at Sully. Modelling of the energies required to move such boulders indicates that wave height (above normal sea-level) would need to be circa 5m. 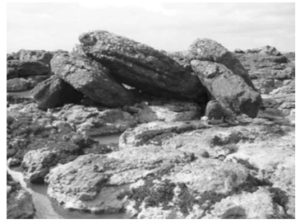 If it was a tsunami want what would have caused it? The British Geological Survey confirm that there have been no substantial landslides off the continental slope for many centuries which precludes an analogy with the mega landslide that occurred off the shelf of Norway 6,000 years ago that caused a tsunami to rush down the North Sea toward Britain washing away Dogger-land (that joined Britain to the rest of Europe following the last Ice Age) and making Britain an island. If the tsunami was not caused by a landslide it may have been caused by movement along the many faults that extend into the inner Western Approaches such as the Central Bristol Channel Fault Zone, the West Lundy Fault Zone, or the Sticklepath Fault shown in the figure below. 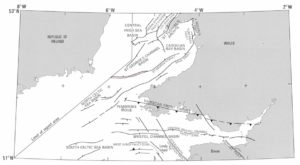 Main Structural elements of the Bristol Channel and the Celtic Sea basins: Graphic from Tappin et. al., Full acknowledgement made

One note of caution with regards the theory if that tsunamis are rarely one single wave but more generally comprise a series of waves. There is no indication from reports that multiple waves hit the Bristol Channel on that day in 1607. There is also the fact that a storm surge also affected East Anglia on the same day with no mention of a great flood anywhere at that time in the English Channel or elsewhere in Wales.

If I had to stick my neck-out I would plump for the Storm Surge theory as the tidal and weather modelling for the end of January 1607 could provide the right conditions. Also, the dating of imbrication of rocks on the beaches and the erosion of the cliff sections is not precise enough to substantiate the tsunami theory.