Although not directly related to the geology of the Heritage Coast, the modern-day natural phenomena that is the Severn Bore, does in-part owe its origins to the physical shape of the Bristol Channel and River Severn. And, it is a wonderful physical feature to see and be aware of. The word bore comes from the old Viking word, bára meaning wave.

Wikipedia defines a “Bore” as a tidal phenomenon where by the leading edge of the incoming tide forms a wave(s) that travel up a river against the rivers current, usually where there is a large tidal range. Bores can only ever be generated on Spring Tides when the alignment of the Earth, Moon and Sun causes a gravitational bulge in the seawater leading to a greater volume of water entering an estuary. Bores are bigger around the time of the equinoxes.

Other rivers with bores include the Bay of Fundy in eastern Canada, the Amazon (pororoca) in Brazil, Qiantang River (silver dragon) in China and the Trent (aegir) of England.

The bores physical features become exaggerated as it flows into such funnel-shaped estuaries as The Bristol Channel and River Severn system. The presence of sandbars in the river also enhance the bore. In the open sea the extra volume of water associated with the Spring Tide is un-noticeable as its spread-out across such a vast area of water, with maybe only a mm or so of additional height. However, as that volume of water is pushed into an ever-diminishing space, the extra volume of water has no place to go except upwards (as it is confined by the banks of the channel into which it is flowing). So what start-off as a tiny ripple downstream changes to a wave of a few meters in height as it moves upstream. 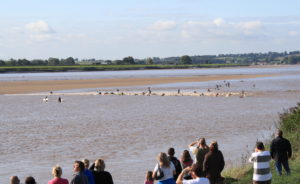 Because the timing of bores is dependent on the tides, the actual height of a bore depends upon the depth of the river channel and wind direction at the time. If ships frequently navigate up affected rivers the disturbance can deepen the river course thereby diminishing the bore. 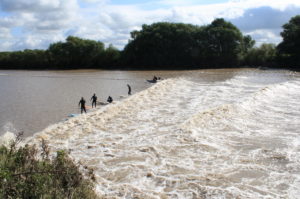 The passage of the bore leads to a lot of churning of the water with the wave often having enough energy to rip-up vegetation along the banks of the river. After a bore has passed through the river can be littered with logs and branches. This introduces some danger to those that choose to surf or canoe the bore wave, which is a very popular thing to do! The Severn Bore tends to form a surf-able wave of up to 2m height between Awre almost to the city of Gloucester. The village of Newnham is the most popular location for the public to view the Severn Bore as it the main A48 road passes within feet of the River Severn although Minsterworth higher up the Severn is also a good spot. The longest single surf-run is reported to be 7.6 miles made in 2006.