Recently had the pleasure of leading a small group of children aged 8 and 11 on a Dinosaur hunt.

Regardless of the weather, that was terrible (howling gale and heavy rain), the kids were still really motivated to explore the Triassic geology near Barry, South Wales for world renowned Dinosaur tracks formed by various Dinosaurs during their early stages of evolution; the location is a SSSI in-fact which stands for Site of Special Scientific Interest meaning it is a protected geological site. 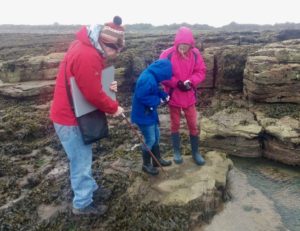 The Late Triassic Branscombe Mudstone Formation ranges in age between 228-208 million years old and is formed of red mudstones and thin sandstone and pebbly units reflecting deposition in a Sabkha environment adjacent to a body of standing water surrounded by soft sticky mud and which periodically became covered by windblown dust. The climate was arid and hot much like the Middle East today. 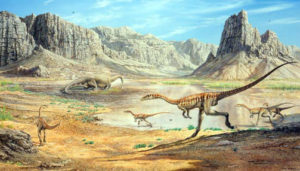 The rocks were deposited in the interior of the Supercontinent known as Pangaea (when all the landmasses of the earth were grouped into one single mega-continent). 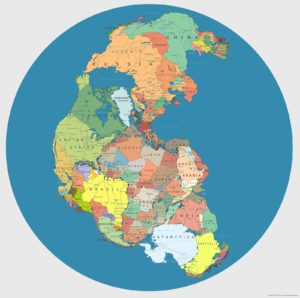 At the locality numerous footprints of early Dinosaurs can be found; it may take a bit of time for you to get your eye in to see the footprints but when you have found one or two you soon get to see many more. It’s likely that the animals walked through the soggy wet mud at the edge of a lake to get to the water to drink; as they walked the mud oozed-up between the toes and feet of the Dinosaurs with the prints quickly drying-out in the hot sun. Alternatively, the prints may have become covered by windblown dust which hardened into rock. These alternate ways of preserving the footprints is important as sometimes the footprints are seen as downward impressions whereas others stand proud of the background rock. They stand proud because the (windblown or water laid) sediment that in-filled the original tracks turned into rock harder than the original rock around it. 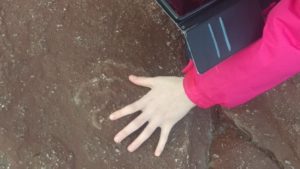 And it’s not just one species of Dinosaur that left footprints; just like today if animals come to drink at watering holes they are hunted by predators. There are many small 3-toed footprints most probably left by agile carnivorous Dinosaurs such as the Therapod, Coelophysis together with larger generally rounded 4-toed footprints of larger plant-eating Sauropod Dinosaurs such as Plateosaurus. It is amazing but you can clearly see the shape of the individual toes together with the mud squeezed out between them and in other places an elevated rim of mud (now rock) around the more rounded 4-toed prints, left from 220 million years ago!! 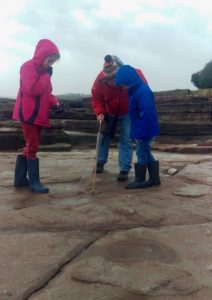 The children were highly excited to find footprints and even though the wind was blowing a gale, the rain came down in heavy bursts and it was cold. They asked me tons of questions some of which were hard to answer – they are children’s questions after all – and I found that very heartening. I really enjoyed explaining the geology and ecology of the early Dinosaurs during the Late Triassic period! 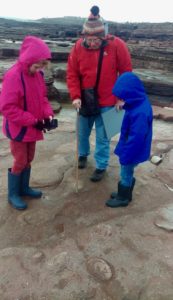