At this time the U.K. was situated at about 40°N within the Laurussia Plate that formed one part of the Pangaea super-continent. Environmental conditions were essentially desert-like, much like large parts of the Middle East and central Australia today (Fig. 1). In such areas sedimentation is characterised by the erosion of wadi systems in which coarse grained pebble beds are deposited and, by the deposition of fine-grained windblown dust and mudstones. Sabkha evaporate bands are frequent the result of evaporation of occasional lakes following heavy rains. 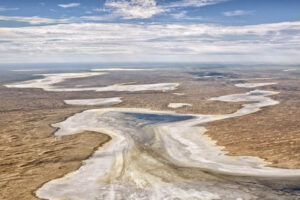 The Triassic rocks are exposed widely across South Wales. At Ogmore there are some isolated spots where you can clearly see where the underlying Carboniferous Limestone has been sharply channelized (Fig. 2) in a similar way that modern Wadi systems in deserts today. The wadi can form in a very short time and gets filled by the basically the same jumble of rocks that helped cut the wadi in the first place. Parking facilities are good and access can be made via the beach at low tide. 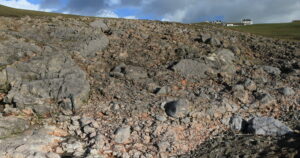 Fig 2. Triassic Wadi (to the right) cutting through Carboniferous limestone (to the left)

Further east in the Vale of Glamorgan at Barry and Penarth for example, the Triassic rocks are much finer-grained red and green mudstones with numerous pink and white gypsum bands (Fig. 3). These rocks were deposited as mud layers on the edge of a lake in an arid environment. 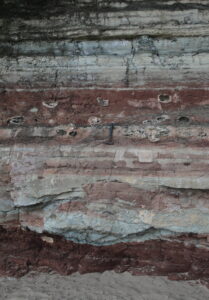 Barry is an ideal location as even at high tide the cliff exposures are not covered by the tide and access is easy via the beach. There is also ample parking and hospitality facilities at Barry. Another location where the Triassic rocks can be seen is at Beachley however, this outcrop can only be accessed at low tide and even then, is quite unsafe because of slippery rocks underfoot. This leads me to decide not to take people on trips to Beachley except at Spring low tides.

By the time of the latest Triassic rifting of Pangaea had progressed to such a point that shallow seas were beginning to flood across the former desert landscape (known as the Rhaetian Transgression). Low-lying areas naturally flooded first leading to the creation of numerous islands from the higher ground areas. Living on these islands were small Iguana-like dinosaurs named Clevosaurus the fossilised remains of which have been found in a quarry further north in the Vale of Glamorgan LINK to Blog 12. At first these seas were brackish with numerous shelly animals living on the sea bed but as sea levels rose more open-marine conditions prevailed leading deposition of deeper water mudstones with open-marine animals such as Ammonites being favoured.

The latest Triassic is marked by a large Mass Extinction event, the cause of which is not known with any real understanding.  The Triassic/Jurassic boundary is exposed at Lavernock and in the cliffs towards Penarth but the beach there consists of numerous large boulders and cobbles meaning that walking along the beach is sometimes difficult. Also, the beach and access to much of the shoreline is not possible at high tide and even at low tide the rocks are covered in slippery seaweed.