By the Early Jurassic (200-180 Million Years Ago) the rifting-apart of the Laurussia Plate had progressed to such an extent that what was to become the U.K. consisted of a number of islands surrounded by warm, tropical seas. To the west and north of the U.K. the proto-Atlantic was rapidly opening and to the northeast the failed rift system of the North Sea was forming. The Tethyan ocean was located 400 miles to the southeast of the proto-U.K.

Following the Mass Extinction event (synchronous with the Rhaetian Transgression) close to the end of the Triassic Period the earliest Jurassic (known to geologists as the Hettangian Stage) rocks were thought to be completely devoid of fossils. However, in 2014 a number of fossilised bones were found within a metre above of the Triassic/Jurassic boundary and below what was previously thought to be the first occurrence of new life in the Jurassic, the ammonite Psiloceras planorbis.

The newly discovered bones were of a previously unknown early Dinosaur that has been named Dracoraptor hanigani, meaning Dragon Thief and is the oldest Jurassic dinosaur yet found in the UK. It is thought that the fossil found was a juvenile about 3m long and a carnivore related to the much younger (Cretaceous-aged) T.Rex. Although Dracoraptor lived on land it was found in marine rocks meaning that it must have floated offshore a while after dying, and prior to being buried by sediment at the bottom of the sea. 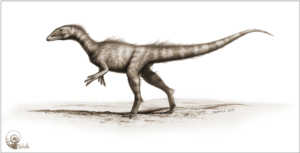 The Triassic/Jurassic boundary is exposed in the cliffs between Lavernock and Penarth which is a classic, world famous location for Geologists. Although parking is available for about 4 cars at Lavernock unfortunately this is not an easy location to get down to or walk about at as the beach is formed of large, loose boulders and cobbles that are also covered with seaweed in many places. The probability of losing one’s balance and slipping is high, so it is not a preferred location for people with unstable knees or ankles to visit. However, it has some great geology!! 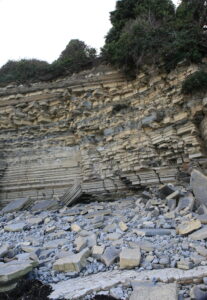 Immediately to the west of Lavernock Point is St. Marys Well Bay and this too is a fantastic location to understand the geology of the area. The full succession (a three-way split) of Early Jurassic rocks is exposed in the cliff face and you can see how the geology evolved through time. It also has some great structural geology. But once again access is via Lavernock Point which has difficult beach conditions.

It is the uppermost (youngest) of the three separate parts of the Early Jurassic, known as the Porthkerry Formation, that forms the spectacular cliffs of the Heritage Coast of South Wales. These cliffs can be seen at places such as Nash Point and Southerndown. Access to Nash Point by car isn’t easy as it is found by driving along twisty, single-track roads. Parking is available on the cliff top at a private car park. The well-known Nash Point lighthouse is located near-by which has a visitor centre and where weddings can be held. 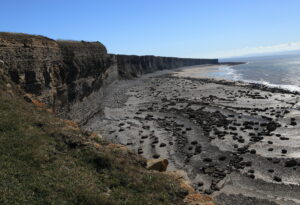 Porthkerry formation exposed in the Spectacular cliif at Nash Point

Southerndown is probably an easier location to get to by car as the quality of the roads are better and it is better signposted. Car parks are located at the cliff top and at the bottom of the cliffs immediately adjacent to the beach. This latter car park is ideally suited to our trip, but it is a very popular tourist attraction and the car park gets full very early on in the day.

Of special interest to geologists is the regular alternation of light grey limestones with softer, dark grey mudstones on the scale of tens of centimetres. This regular alternation accumulates to a thickness of up to 120m in places and the units extend laterally for many miles. There are two alternative explanations as to the cause of this repeated alternations, one being that it is the result of sea-level changes influencing water depth and hence sedimentation and secondly, that it is the product of secondary alteration of the original sediment.

I think the consensus now is that the repetition is the product of climatic and sea-level fluctuations caused by variations in the orbit and attitude of the Earth as it moves around the Sun (eccentricity, tilt and precession). These cycles were first identified by Serbian astronomer Milutin Milankovitch in 1920.

The rocks of the Early Jurassic also exhibit some fantastic palaeontology too; with crinoids (sea-lillies), echinoderms (sea-urchins), corals, ancient oysters and cockle-like shells and the classic ammonites being common. Trace fossils, such as feeding burrows left behind by small invertebrate organisms such as worms and crustaceans are visible in much of the Jurassic rock. In a similar way there are some world-class examples of faulting and jointing affecting the rocks. 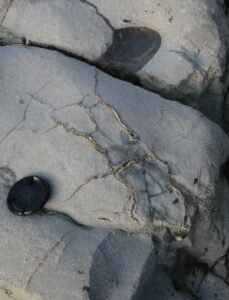