All the rocks exposed along the Heritage Coastline of South Wales contain evidence of past life, namely fossils and trace fossils, of one form or another. The oldest rocks that we can see in the area are from Early Carboniferous Epoch (circa 340 Ma) ranging through the Triassic Period (252-201 Ma), to Early Jurassic (190Ma).

Preserved life-forms range from sea-lilies (Crinoids) and corals indicative of reef systems in the Early Carboniferous Limestone to sea-shells (Chlamys), oysters (Liostrea) in the upper units of the Triassic rocks. But importantly, the Triassic was the Period when Dinosaurs began to evolve and a number of instances of the evidence of Dinosaurs have been found in the Triassic rocks of South Wales. 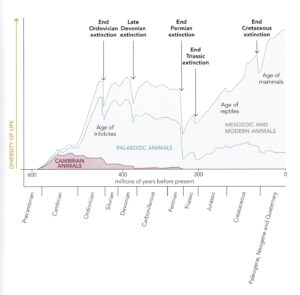 Life-forms are very rare to find in the very Earliest Jurassic, or at least that has always been thought to be the case, before life recovered in the later Early Jurassic. The first occurrence of the Ammonite Psiloceras planorbis is used to confirm that rocks are from the Jurassic Period.

Fossilised bones of Ichthyosaurs and Plesiosaurs (the Loch Ness Monster is thought to be a Plesiosaur) have been found in the area and it is worthwhile to highlight that the rocks between Southerndown and Llantwit Major are of a similar same age as those found on the Jurassic Coast of southern England; I refer you to the recent David Attenborough BBC programme about the giant Ichthyosaur found near Lyme Regis in Dorset.

The oldest rocks we will see are the Early Carboniferous Limestones that were formed in warm, tropical seas when Britain was located between 2° and 8° N of the paleo-equator, roughly equivalent to the Bahamas of today. Limestone is formed in a number of ways; firstly, by the accumulation of tiny crystals of Calcium Carbonate either derived from eroded shells or from the precipitation of Calcium Carbonate directly from seawater and secondly, by the accumulation of the hard, protective outer casings of soft-bodied organisms namely corals and shells. These hard parts are also formed by the capture of Calcium Carbonate from the seawater by the organisms.

The carboniferous Limestone can be seen at Porthcawl and Ogmore. Technically, Porthcawl is outside of the Heritage Coast but it does have good outcrops and is easily accessed from ample car parking facilities. Unfortunately, it is a problematic place to get to as it is on the western side of the Ogmore estuary and requires a 20-minute drive around the estuary to access the outcrop. The Carboniferous limestone however can also be seen at Ogmore (which is located on the “same-side of the river” as the rest of the Heritage Coast outcrops and where there is ample car parking and easy access to the outcrops. Crinoids (sea-lilies) and corals can be found preserved in the limestone.

Rocks of the Permian Period are absent in South Wales; the Permian was the period following the Variscan Orogeny when all of Britain was a desert landscape with intense erosion.

The majority of Triassic aged rocks in South Wales although present do not contain much evidence of life other than limited pollen and spores. Environmental conditions continued to be very difficult for life to get established in the deserts and hyper-saline lakes indicated by the abundant gypsum (evaporate salt) bands. However, as the supercontinent of Pangaea began to rift-apart seawater began to flood the arid environment and fossils can be found in the uppermost Triassic rocks (the Penarth Group).

The best place to find Triassic fossils is between Penarth and Lavernock. These localities are easy to drive to but, parking is limited and walking along the beach can be difficult because of the loose boulders and is best suited to those that are fit, without ankle or knee problems. It is thought that sea depths were shallow as many of the sandstone and limestone beds show fossilised ripples. In these beds abundant Liostrea (ancient oysters) and Chlamys bi-valves (ancient cockle-like shells) can be found in many of the fallen blocks on the beach. In-places fossil bones and teeth belonging to reptiles can be found in what is known as “the bone bed.” 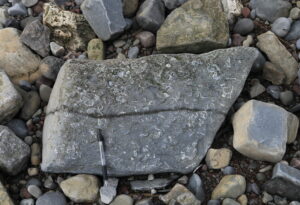 Although the Jurassic is the most well-known geological Period with regards dinosaurs, it was in the Triassic that they began to evolve and diversify. And Triassic aged dinosaurs have been found in South Wales. As far back as the 1950’s fossil remains of a small, Iguana-like dinosaur named Clevosaurus were found in a quarry in the Vale of Glamorgan LINK. The not-uncommon bones that can be found in late Triassic rocks where we visit may be of such a dinosaur. 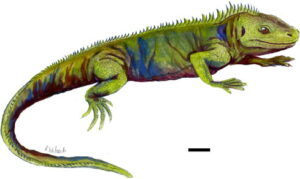 An exceptional indicator that dinosaurs were spreading their range in the Late Triassic can be found in the presence of multiple dinosaur foot-print tracks near Barry. Although not being a fossilised fragment of the dinosaur itself the tracks can provide geologists with vital information about the size and weight of the animal and whether it walked on two feet or four. Foot-prints, burrows and feeding trails are called Trace Fossils as they indicate the presence of an animal but are not part of the animal. The study of Trace Fossils is a separate area of geology known as Ichnology.

At the location (LINK to Blog 9) it appears that a number of different species of dinosaur left footprints in the soft mud at the time that probably fringed a temporary lake within the desert environment. The smaller prints probably were made by a small predatory Therapod dinosaur (walked on two feet) such as Coelophysis. There are also larger four-toed prints that suggest they were made by a large Sauraopod dinosaur (walked on all fours) such as Plateosaurus.

As you walk westwards from Penarth to Lavernock the rocks become younger and at one point the boundary between the Triassic and the Jurassic can be seen. The earliest Jurassic was always thought to be devoid of life following the end Triassic Mass Extinction event but in 2014 an almost complete skeleton of a small velociraptor-like dinosaur was found a meter or so above the boundary at Lavernock. This fossil is the oldest Jurassic dinosaur yet found in the U.K. and has been named Dracoraptor hanigani meaning Dragon Thief. It is obvious that if one specimen can be found then there may be others close by waiting to be found.

It seems that life in the open oceans began to increase and diversify during the Early Jurassic. A number of different species of Ammonite can be found in the regularly alternating limestones and mudstones of the Porthkerry formation, most commonly Psiloceras planorbis. 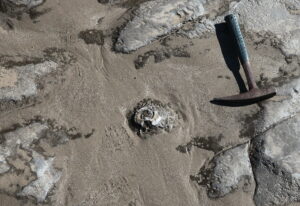 Ammonites have a coiled, disc-like shell that is segmented into a number of chambers to help the animal float in the sea. The animal itself, which is similar to modern day Cephalopods such as squid, lived in the first chamber nearest the aperture and it moved around by pumping seawater out of a tube set within the tentacles. It probably fed on small fish and plankton.

Other Early Jurassic fossils that can be found in the rocks exposed between Southerndown and Nash Point include ancient sea urchins (Echinoids) plus a number of different types of bi-valves (meaning two shells such as modern-day cockles) such as Plagiostoma and nests of Gryphaea better known as Devils toenails. It has also been known to find the remains of Ichthyosaurs and Plesiosaurs in the rocks of the Porthkerry Formation so keep an eye open for them!

Trace fossils can also be found at Southerndown that mark the burrows of ancient works or prawns as they moved through the soft-sediment on the ancient Early Jurassic seafloor.

It is obvious that a whole variety of exciting fossils and trace fossils can be found when out walking along the seashore of the Heritage Coast ranging from fossil corals and sea-liliesin the Limestones of the Carboniferous, through sea-shells and possibly dinosaur bones and footprintsin the late Triassic rocks, to Ammonites, Devils toenails and even Ichthyosaurs & Plesiosaursin the youngest rocks.