I recently had the great pleasure of leading a pair of lovely mother and daughter from Jakarta, Indonesia to various locations on the Heritage Coastline of South Wales. The mother was visiting her daughter who is studying a university degree in the UK. They became aware of South Wales Geotours from its online footprint. We were extremely fortunate with the weather and in-fact it would appear we went out on the very last day of the Summer of 2019!! And we were not the only ones making the most of the weather because we were joined at our first locality by a film crew from Netflix; but more on that later. 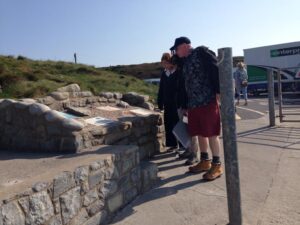 We started-off at the glorious bay of Southerndown (Figure 1) where the Lower Jurassic Porthkerry formation is exposed in the spectacular cliffs. By the Early Jurassic (200-180 Million Years Ago) the rifting-apart of the Laurussia Plate had progressed to such an extent that shallow seas had started to flood into/onto the Pangaea continent as it started to break-up. What was to become the U.K., consisted of a number of islands surrounded by warm, tropical seas.

Of special interest to geologists is the regular alternation of light grey limestones with softer, dark grey mudstones (Figure 2) on the scale of tens of centimetres. This regular alternation accumulates to a thickness of up to 120m in places but more generally 50-60m in the cliffs at Southerndown, with individual units extending laterally for many miles. This implies that the rocks were deposited in a an extensive and relatively stable depositional setting. 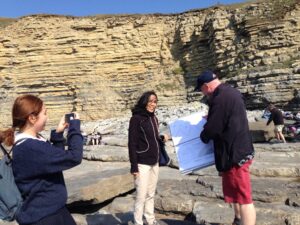 There are two alternative explanations as to the cause of this repeated alternations, one being that it is the result of sea-level changes influencing water depth and hence sedimentation and secondly, that it is the product of secondary alteration of the original sediment. I think the consensus now is that the repetition is the product of climatic and sea-level fluctuations caused by variations in the orbit and attitude of the Earth as it moves around the Sun (eccentricity, tilt and precession). These cycles were first identified by Serbian astronomer Milutin Milankovitch in 1920 and operate on tens of thousands of years duration.

The theory essentially runs as follows: as the earth orbits the Sun in a non-circular way (in-fact an elliptical orbit) when the Earth is further away from the Sun it receives less insolation and is therefore colder. During these colder periods the polar ice caps increase in size and lower sea-level. When the Earth is closer to the Sun the Earth receives more solar radiation and becomes hotter. When its hotter the ice caps melt and sea-level rises. When sea-levels are higher there is less land to suffer erosion and the resultant sediment is dominated by very fine-grained muds, whereas when sea-levels are lower sediment structure is coarser-grained. Thus the black mudstones of the Porthkerry Formation were deposited when the Earth was closer to the Sun and the limestones when the Earth was far from the Sun. Because there are many alternations of mudstone and limestone exposed in the cliffs, they represent many cycles and thus must have been deposited over many millions of years.

The Porthkerry Formation is also affected by abundant faulting and jointing formed during the movement of the Earths tectonic plates. At one locality a fault is very clearly exposed offsetting the alternating layers of the Porthkerry Formation, admittedly with only about a metre of offset from one side to the other. The line of the fault traced in the cliff can be seen extending out through the wave cut platform at the base of the cliff (Figure 3) which allows one to visualise the 3-dimensional shape of the fault. 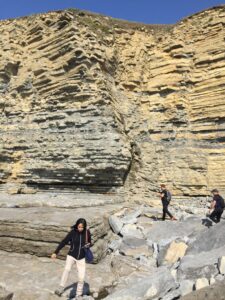 The rocks are also shot-through with lots and lots of factures that probably formed during the flexural relaxation of the Crust after tectonic collision. There is essentially no offset across the fracture which is an essential difference between faults and fractures. Fractures are natural cracks in the rock. Much like the fault described above the fractures can be seen in 3-dimensions, extending from the vertical cliffs and into the horizontal platform at sea-level. These cracks together with the alternating layers leads to the cliffs being very unstable. The fractures in the wave-cut platform result in the limestone eroding into blocks that resemble row after row of loaves of bread just taken out of the oven (Figure 4). 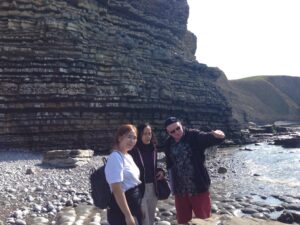 Fig 4. Fractures can be traced from the cliff face into and along the beach (Photo: South Wales GeoTours)

The rocks of the Early Jurassic also exhibit some fantastic palaeontology too; with crinoids (sea-lillies), echinoderms (sea-urchins), corals, ancient oysters and cockle-like shells and the classic ammonites being common. Trace fossils, such as feeding burrows left behind by small invertebrate organisms such as worms and crustaceans are visible in much of the Jurassic rock. In a similar way there are some world-class examples of faulting and jointing affecting the rocks.

So how does Netflix fit into our story? Well, the lower car park at Southerndown was closed on the day which surprised us greatly. It turned out that a large film crew was filming a new Netflix production of Aldous Huxley’s most famous novel “A Brave New World” at Southerndown due for release in 2020, https://variety.com/2019/tv/news/brave-new-world-series-cast-1203246955/. The car park was full of television crew lorries and vans brimming over with cables, cameras and lots of other TV paraphernalia and a large catering tent was set-up too. The filming was taking place up on the cliff top. 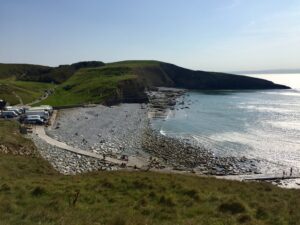 I managed to walk up the cliff side to see how close I could get to the action. Glad to say I got pretty close. I saw a lot of activity but I didn’t see any famous actors unfortunately, not that I’d notice them if I did. 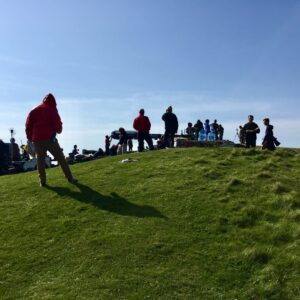 After Southerndown we moved on to an area just to the east of Barry Docks. Here the geology is very different and consists of late Triassic rocks that are older than the Lower Jurassic rocks at Southerndown. The Late Triassic Branscombe Mudstone Formation (Figure 5) ranges in age between 228-208 million years old and is formed of red mudstones and thin sandstone and pebbly units reflecting deposition in a Sabkha environment adjacent to a body of standing water surrounded by soft sticky mud and which periodically became covered by windblown dust. The climate was arid and hot much like the Middle East today. 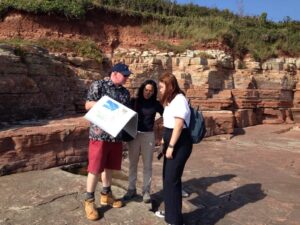 The rocks were deposited in the interior of the Supercontinent known as Pangaea (when all the landmasses of the earth were grouped into one single mega-continent). At the locality numerous footprints of early Dinosaurs can be found (Figure 6); it may take a bit of time for you to get your eye in to see the footprints but when you have found one or two you soon get to see many more. It’s likely that the animals walked through the soggy wet mud at the edge of a lake to get to the water to drink; as they walked the mud oozed-up between the toes and feet of the Dinosaurs with the prints quickly drying-out in the hot sun. Alternatively, the prints may have become covered by windblown dust which hardened into rock. These alternate ways of preserving the footprints is important as sometimes the footprints are seen as downward impressions whereas others stand proud of the background rock. They stand proud because the (windblown or water laid) sediment that in-filled the original tracks turned into rock harder than the original rock around it. 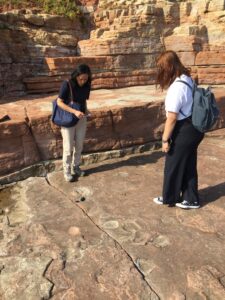 And it’s not just one species of Dinosaur that left footprints; just like today if animals come to drink at watering holes they are hunted by predators. There are many small 3-toed footprints (Figure 7) most probably left by agile carnivorous Dinosaurs such as the Therapod, Coelophysis together with larger generally rounded 4-toed footprints of larger plant-eating Sauropod Dinosaurs such as Plateosaurus. It is amazing but you can clearly see the shape of the individual toes (Figure 7) together with the mud squeezed out between them and in other places an elevated rim of mud (now rock) around the more rounded 4-toed prints, left from 220 million years ago!! 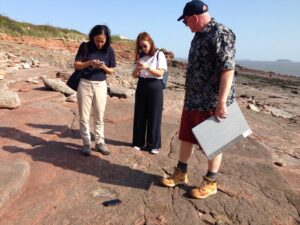 Fig 9. The Ladies were fascinated with the Dinosaur footprints (Photo: South Wales GeoTours)