Access to all localities is largely dependant on the Tides which will dictate the precise timing of the Field Trips offered by South Wales GeoTours. Please check here to see view a timetable of tides for the area.

The rocks to be visited during field excursions provided by South Wales GeoTours cover the time period from the Early Carboniferous period to the mid Early Jurassic period, a time-span of approximately 169 million years. 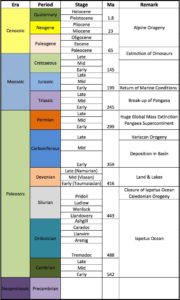 Although the intervening Triassic Period is well represented in South Wales rocks of the Permian Period (duration of 47 million years) are limited to small, isolated outcrops in the northeast of Wales; extremely arid, rugged continental conditions across the majority of Wales during the Permian were not conducive to deposition and preservation. The biggest Mass Extinction in Earths history also occurred at the end of the Permian when it is estimated that up to 96% of life on Earth disappeared. 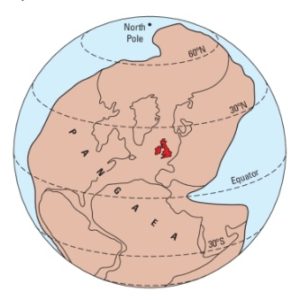 The following summary describes the stratigraphy beginning with the oldest rocks visited on excursions, namely the Early Carboniferous before sequentially moving up through the Triassic units, during which time a further less severe Mass Extinction event occurred, finally describing the youngest rocks, namely rocks of the Early Jurassic.

The Early Carboniferous marks a time when Britain straddled the Equator with a hot and wet climate. At that time South Wales was located on the southern fringe of a large landmass that occupied the majority of the rest of Wales. The southern fringe comprised warm, shallow seas on which a large number of coral reefs and shelf limestones were deposited in an environment much like the modern day Bahamas. The limestones represent a combination of the accumulation of calcium carbonate as the product of coral formation together with the precipitation of individual crystals of calcium carbonate. A common reef forming organism at that time were Crinoids much like sea-lilies of today although bivalve shells are also present.

A distinctive feature of limestone is that it is soluble in the presence of fresh water. Rain water percolating through the lithified limestone steadily erodes the fabric of the rock gradually opening-up cracks or fissures in the rock which only enhances the opportunity for rain water to exploit the fissures. Ultimately this leads to a regular blocky appearance to the limestone, referred to as a Karst landscape. 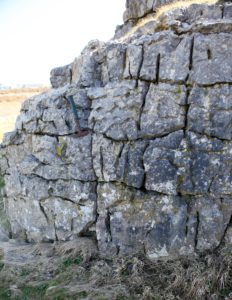 Late Carboniferous and all Permian rocks representing circa 80 Million years of Earth history are absent along the Heritage Coast.  The first appearance of Triassic rocks is represented by the deposition of coarse-grained conglomerates that infill an early Triassic channel system indicating highly erosive conditions in a desert environment. This channel is directly analogous to modern-day Wadi systems. 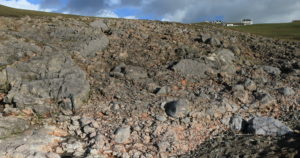 The late Triassic Mercia Mudstone Group is dominated by rocks deposited in arid environments such as a desert and associated ephemeral lakes much like the interior regions of the Middle East today. 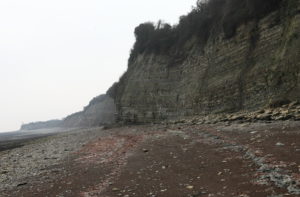 The outcrops also clearly demonstrate the effect of extensional tectonics resulting in Normal Faults as the supercontinent of Pangaea began to rift apart. 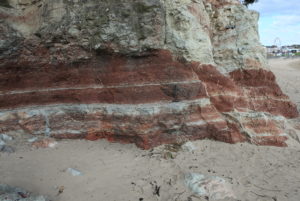 Although the majority of the Triassic rocks were formed in arid environments onshore Pangaea these localities expose the uppermost Triassic units that formed as the palaeo-landscape commenced the transition to marine environments. As a result these latest Triassic units contain abundant fossils ranging from Liostrea and Chlamys to less commonly prehistoric fish bones. 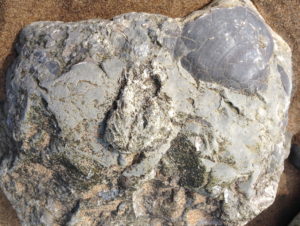 Trace fossils that mark the movement of organisms across and/or through the soft sediments prior to lithification, can be found.

At one locality a suite of reptile footprints have recently been found within rocks of the Mercia Mudstone Group. These footprints are believed to have been formed by the passage of a small group of early dinosaurs walking along the edge of an ephemeral lake. The heel and 3-toes of the reptile can be seen as the animal squelched through the soft mud on the fringes of the lake. The impressions of the footprints were lithified to rock rapidly after formation and have been preserved to today. 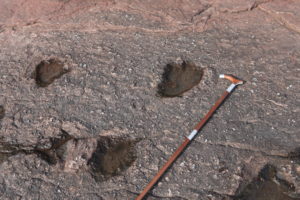 The boundary between the Triassic and the overlying Jurassic is exposed at a number of localities in South Wales although debate still rages about its precise position. The boundary marks the end of continental deposition and the start of marine deposition as the seas flooded the Triassic landscape resulting from the break-up of the super-continent of Pangaea.

The lowermost part of the Jurassic is barren of fossils following the Mass Extinction event at the end Triassic. The cause of that extinction is not known but was probably influenced by & related to the break-up of the global supercontinent, Pangaea during which time intense volcanism and extreme climate change likely occurred. Another possible causes was a remote Meteor impact.

The Early Jurassic Lower Lias Group are exposed in the tall cliffs of the Heritage Coastline. The rocks are an example of the influence of cyclicity on the formation of rocks, in this case believed to be the effect of Milankovitch cycles (result of the tilt of the Earth, shape of the Earths orbit around the Sun and orbital precession) on deposition of sediments. 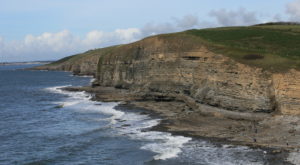 The localities present the opportunity to find Ammonites (Psiloceras) and Bivalves (Chlamys and Liostrea) that mark the re-population of the Early Jurassic oceans following the end-Triassic Mass Extinction event. 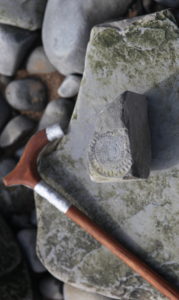 The outcrops, as part of the inverted Mesozoic basin, exhibit both small and large scale structuration (folding and faulting) of the strata as a result of Plate movement during the Neogene Period when the African continent collided with Europe resulting in the Alpine Orogeny. Two phases of Inversion can be identified associated with the Alpine Orogeny, with Alpine 1 in the late Cretaceous (93-63 Ma), with a second phase of compression in the Miocene (13 Ma). 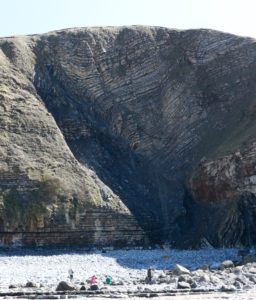 Rocks younger than the Lower Jurassic are absent onshore Wales but have been penetrated by Oil & gas wells and boreholes in Cardigan Bay.